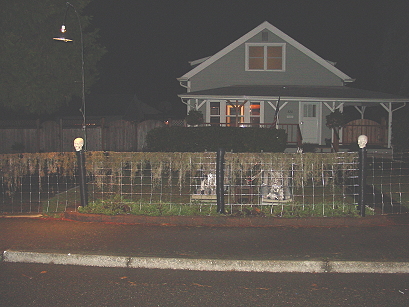 Hesitantly, conscious of the quiet street and far off trick’r’treaters, Peter approached the dark house. He knew that he was really too old to be trick’r’treating but, being a young looking 13, and having on a pretty convincing Boba Fett costume, he thought he just might get away with it. It’s not that he really wanted candy, anyway. This was the only house he would approach this Halloween night. His real reason for coming to this particular house was different from the other costumed kids’.

Just about every one of his schoolmates were out somewhere else, getting into God knows what kind of trouble. But that wasn’t Peter’s problem. His problem was having no friends. And, if that wasn’t bad enough, he wasn’t ever likely to get any. Not that he wouldn’t love to have one, even if it was a girl, but his feelings for guys, along with his incapacitating shyness, pretty much excluded this option.  The doctors said he had a weak heart but you’d never guess it by the strength of his heartaches. The feelings from that allegedly weak organ were strong enough to make his nights empty and his days miserable.

Every time he was near a good-looking guy, heck, any guy, he felt a charge of excitement. Sometimes that would lead to an embarrassing (but thrilling) stirring down below, but most often it was just a feeling of being on top of the world. Sadly, though, he’d seen some of the reactions at his school when they found out some guy was gay. Teasing was the least of the problems.

Peter had a classic case of Junior High Shyness, and he couldn’t manage to string two words together, in a social context, much less hold an actual conversation. Sure, he knew all the answers in class, but if asked to actually give an answer, he completely froze up. Saliva would build in his throat while he tried to speak, finally choking him, and he’d have to cough till it was clear again. While this, and the heart condition that kept him benched during PE, were cause for some serious teasing, it didn’t translate into any overt physical abuse. Being outed as gay, though, would be another thing altogether.  The very idea terrified him.

Despite a school policy against bullying, accidents seemed to befall those labeled as queer. Shoves in the hallways, gum stuck into their lockers’ locks, loud comments, even false accusations of drugs or guns in their lockers would haunt them through their school days. It wasn’t something Peter wanted to experience firsthand, and he made every effort to hide his orientation.

But sometimes, like on this Halloween, he had the chance to act without worrying about repercussions. Tonight, at last, he would be able to get close to Bax, and maybe, if he were lucky, might even touch his hand when Bax passed him his ‘treat’.  If only it could be another kind of treat, if only he had the nerve to ask. He’d dreamed about hugs and kisses from Baxter for years. No such luck, of course. He couldn’t imagine asking for such a thing. Still, he’d see Baxter alone tonight, and that was something.

Baxter, who hated his full name and insisted that everyone, even teachers, call him just “Bax”, was a gorgeous hunk of adolescent male. His every movement was unpremeditated poetry. His profile ought to be in fashion magazines or sculpted into statues. His smile could light up the room, and that’s even if you were facing the other way. Any direct Bax smile would blow your mind.

Even when correcting someone in the use of his name, he did it so nicely and so well that you felt that, if you said “Bax”, as he asked, you were destined for rewards in Heaven, or maybe just lifelong friendship.  Baxter was easily the most popular boy at school; everyone wanted a piece of the wonder that was Baxter, and Peter more so than most.

For two months now, since starting at this school, Peter had wanted to get closer to Bax, but fear had kept him away. Tonight, though, he knew that Bax had to be at home handing out candy, since his mother was going to be at school, working to support the two of them. He wasn’t supposed to know it, but Bax’s mom was the school janitor.

He had noticed Bax occasionally talking to a woman at school after everyone else had left for home. The lady would straighten out Bax’s hair, though he was clearly irritated by this, and once managed to kiss him before he left. She was the janitor, daily pushing a huge trash bin and often wielding one of those strange dust mops that seem designed to trip anyone who approached. Peter had never been spotted watching them, though, as the whole point was to avoid being seen…by anyone, ever.

Onto the porch of the dark house, and up to the door he went, where Boba Fett suddenly melted into a quivering mass of despair. How, how, how could he shout out “Trick or Treat” and get Bax to the door? Hell, Bax might even recognize his pitiful choking voice from school. Terror immobilized him there on the doorstep. Peter found that he couldn’t utter a sound, except that damned choking cough. There was no point in even trying. Worse, there weren’t any other kids nearby who might call out for him.

Should he ring the bell? He looked around the doorway, frantic. No, this was one of those old buildings that didn’t even have a bell. How about knocking on the door? Yeah, maybe that would work.

He slowly approached the door, and had raised his hand to knock, when the door opened, as if on its own. Beyond was an abyss of blackness even darker than the porch, so far from the nearest streetlight. Peter froze, completely paralyzed in fear, seeing nobody in the forbidding darkness beyond the doorway.

Slowly, he became aware of a very dim light straight ahead. It was terribly faint, looking like one of those electro-luminescent nightlights that has pretty much died. That thought was far from foremost in his mind, though. He just couldn’t work his mind around the idea of the door opening on its own, frankly, and the creepy dimness beyond made his bladder feel suddenly full.

Suddenly, with a surreal shriek, a huge black ‘thing’ jumped towards him. Peter, already at the peak of his stress limit, heart racing like a Nascar competitor, did the only thing he could. He collapsed on the doorstep.

The first thing Peter noticed on waking was that there seemed to be light everywhere.

His eyes had been getting used to the dark, and now this light was painful. Flashing red and white lights surrounded him, with red and blue lights strobing onto brightly visible walls. Dark silhouettes raced towards him, and he heard sirens wailing, and a loud, eerie sobbing right next to him. His ears ached and his thoughts raced so fast that he thought he might pass out again, and he swallowed hard, trying to identify something, anything, in this noisy bedlam.

A dark shape leaned over him, a threatening shadow, and Peter screamed aloud.

It was Bax, dressed in a huge black vampire cape, plastic fangs and with a black mask dangling by a black elastic string around his neck. His tears were falling onto Peter’s face, as Bax held Peter’ s unmoving body close, hugging him in a tight grip, and clutching his hand in a warm loving touch, despite efforts of the now nearby silhouettes to disengage them.  The further shadows resolved themselves into paramedics and, further off, strobing ambulance lights.

Peter coughed and whispered, suddenly eloquent in his dreamy, near-unconscious state. “It’s okay Bax. It’s okay. I forgive you. I don’t mind, really. It’s okay. I know it was only a joke.” Peter smiled weakly, feeling himself lighter suddenly, somehow more free. “Just…hold me some more though, Bax. It feels so good. I’ve dreamed of a hug from you for months.”

Peter swallowed hard and closed his eyes for the last time, afraid of seeing the look in Baxter’s eyes. But he needn’t have worried, Baxter’s blue eyes were filled only with tears, concern and, had Peter only been able to open his eyes and see it, smiling affection.  Baxter, the most popular boy in school, had long ago noticed the shy kid, after all.  Did Peter realize it? Baxter couldn’t stop crying, couldn’t let go of Peter.

“Okay, son”, one of the uniformed shapes finally said, touching Baxter gently, “I don’t know your name, but you did the right thing calling 9-1-1 right away. But, listen, you have to let the paramedics deal with him now. Let your friend go, while we ask you some questions about what happened tonight. Okay? Can you let him go and get up?”

Slowly, reluctantly, Baxter released Peter, lifting his head carefully and lowering it gently onto the floor as he worked his way to his feet.

Peter then felt himself lifted up but was surprised, though only mildly, when he couldn’t see anyone holding him. He was lifted higher and higher, his body feeling lighter and lighter, while his consciousness of being loved, the treat of that warm happiness, grew ever stronger. It was as if that final Baxter smile had somehow filled him up to brimming with lightness, with calmness, and banished all shyness and worry. Below him, as if in a dream that receded into unimportance, he could see Baxter weeping, talking to the officers.

His last thought was warm and diffuse as the light around him: the beautiful Baxter liked him, liked him.

Paramedics lifted Peter’s body, now covered with a sheet, into the silent ambulance, its lights and siren no longer needed.  On the sidewalk, the handsome boy dressed as a vampire wept.

Email comments on Trick to BK_Trab@shaw.ca